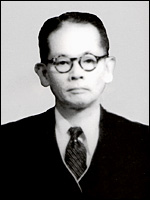 Giei Funakoshi is the first son of Gichin Funakoshi. After Gigo died still young and Gichin passed away, karate became simply a fighting sport, ignoring the words of Gichin. Giei deplored the situation and succeeded in teaching the karate-do of Gichin after becoming the second chairman of Nihon Karate-do Shoto-kai.

Giei emphasized the importance of reconstructing Shoto-kan dojo as a technical center and as a place of training. Giei passed away before the new dojo was built, but laid the foundation for its construction.