Remarks from the President 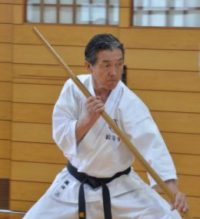 Shotokan was constructed in Zoshigaya, Mejiro, Toshima-ku, in January 1939, by Gichin and Yoshitaka Funakoshi and other members of Shoto-kai.

The dojo prospered and was one of the three dojo of martial arts, together with Kodokan of judo and Yushinkan of kendo.

Shotokan, as the main dojo of Shotokai, served not only as a place for trainees to learn karate skills, but also as a place where Yoshitaka and other masters studied and developed karate skills, established practice systems, and invented kata (forms), including Taikyoku no kata and kon-no kata Matsukaze. Shotokan played important roles in the development of karate-do.

After Giei Funakoshi died, who served as the second Chairman of Broad of Directors of Shotokai, Motonobu Hiroshini worried about such moves. He discussed it with Shigeru Egami and decided that reconstruction of Shotokan was indispensable for keeping the spirit of Gichin Funakoshi. They asked for the co-operation of Shotokai members, and constructed the new Shotokan dojo in Shibaura, Minato-ku, in January 1976.

Shigeru Egami became the scond President of Shoto-kan. Since then, Shoto-kan has been a center for spreading the ideology of Shoto-kai karate and studying and spreading karate skills.

In Shotokan, periodical lessons of kon are given besides daily practices.

Kon lessons are given to understand that karate is the basis of all martial arts as Gichin Funakoshi said.

In 1995, Jotaro Takagi became the President of Shotokan. Since then, He have had many opportunities to give lessons to grade holders.

Through the lessons, We are practicing one of Gichin’s twenty lessons: “Train karate throughout your life”.

At the end of July in 2003,  Shoto-kan Dojo will move to Kikuｋawa, Sumida-ku, due to regional development projects.

In 2015, the Enbu Taikai and the celebration for the 80th anniversary of the foundation of Shotokai were held at the main hall in the National Olympics Memorial Youth Center. About 1000 people took part in this event from the domestic and oversee branches.

After I worked for the manager of Chuo university Karate club for 13 years.I was inaugurated as the President of Shotokan in 2016.I will continue this tradition from many senior teachers and make an effort to keep and develop Shotokan as the technical center of Budo Karate. I make a fresh resolution to attain next target for the 90th and 100 th anniversaries.