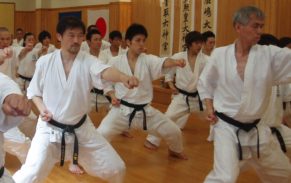 Shoto-kai is a karate-do organization with time-honored traditions, which was founded by Gichin Funakoshi, the originator of modern karate-do.

“Shoto” is the “pen name” of Master Funakoshi. “Sho” means a pine tree, and “to” means strong waves. Master Funakoshi used this name, aiming to be as dignified as a pine and as strong as waves hitting against rocks.

Shoto-kai follows the words of Master Funakoshi, who said “Karate-do is an art for training our own minds, sports that can be practiced by people with little physical strength, an art for maintaining health, and the art of self-defense”.
Therefore, karate-do is not a martial art only for people who have strong muscles and physical strength, but is an art that all people of all ages all over the world need and can practice.

Shoto-kai follows the last instruction of Master Funakoshi: “There are no contests in karate. Be devoted to kata (forms).” Shoto-kai has a lesson system that focuses on practicing kata.

The Shoto-kai-seitei kata were established by Master Funakoshi by incorporating the advantages of both Shorei-ryu, which is an art of Okinawa and is appropriate for building up physical strength and muscular strength, and Shorin-ryu, which uses fast moves. Taikyoku-no-kata are also practiced by beginners.
To practice kata, trainees need to 1) move their bodies equally to the right and left, 2) smoothly balance themselves while moving forward and backward and changing their courses, and 3) use a breathing method that prevents shortness of breath.
For trainees, practicing kata is an art for maintaining their health, an exercise for maintaining their physical shape, a practice of an art of self defense, and/or an art for training their minds, depending on their objectives.

In terms of chivalry, kata involves unlimited changing skills. Trainees make new discoveries by practicing kata repetitively. Trainees also learn the appropriate distancing by practicing parts of each form and having kumite (sparring, not combat) lessons.
Master Funakoshi’s ideology was “karate is the base of all arts”. Based on this ideology, Shoto-kai, periodically holds kon lessons. Beginner trainees learn the elements of kon, and upper level trainees practice the kata and kumite of kon to learn the skills of kon.

Shoto-kai karate-do is an art that can be practiced by people regardless of age, sex, personality, and physical size at any time and is easy to continue.