The characteristics of karate skills of Shoto-kai can be expressed as the execution of large moves from low standing or other low positions.
Sufficient exercising of the legs enables trainees to move fast, using the power of the legs.

The leg-based moves do not need physical power, and people of all ages and both sexes can learn effective offensive and defensive moves of striking and kicking. Also with the leg-based moves, trainees can display their skills in various blocking techniques.

Karate exercises usually begin with calisthenics. Any exercises are acceptable, if they make the parts of the body, joints, muscles and tendons flexible. Here, typical exercises are described among those performed today.

While sitting on the floor, spread your legs as wide as possible. While spreading the legs, bend forward, toward one of the legs, and then the other leg. When bending forward, remember to extend your arms, and continue practicing, so that your head, then your chest, and finally your stomach touch the floor. Similarly, carefully exercise bending sideways.

Bend, so that chest

so that chest and

Kicking while standing up

Stand with your feet close together, bend your knees, and crouch. While standing up fast, kick. First raise knee, and kick as if you are kicking the toe out high. Return to the crouching position after kicking.

Stand up and raise knee.

Kick as if the toe is kicked out high.

Flex your knees slightly, and kick forward. Practice until your knee touches your chest.

as fast as possible.

Stand with your feet together, and slightly flex your knees. Kick one of the legs repetitively as fast as possible.

Calisthenics with a partner 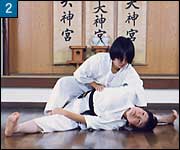 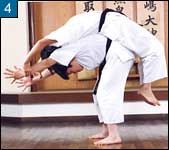